The Regions of Franconia invite you - take a look on the traditional franconina costume, explore the history or celbrate "Carnival in Franconia"!

Fränkische Schweiz - Easterwells (April, 2 weeks before and after Easter)

Every year, when time is getting close to easter, more than 400 wells and fountains are decorated with thousands of colorful easer eggs and ribbons. This is a sight, you will remember. This tradition goes back to a time, when people had to carry water from the springs in the valleys up to their villages wich were very poor with water. The tradition of gracing these water points shows the appraisal of this life giving Element. More than 200 villages decorate their waterplaces with garlands of branches and eggs. An Average Easterwell "Osterbrunnen" is amblazoned with 1.800 - 2.000 handpainted eggshells. The biggst and most famous "Osterbrunnen" is located in Bieberbach, ist is so monumental, it even holds a world record and ist listed in the Guiness Book of World records. Take a tour through the scenic villages and marvel these beautiful sights. Grab yourself a flyer with a map inside, that shows all wells and fountains and guides you past the greatest most imposing easterwells of franconian switzerland. 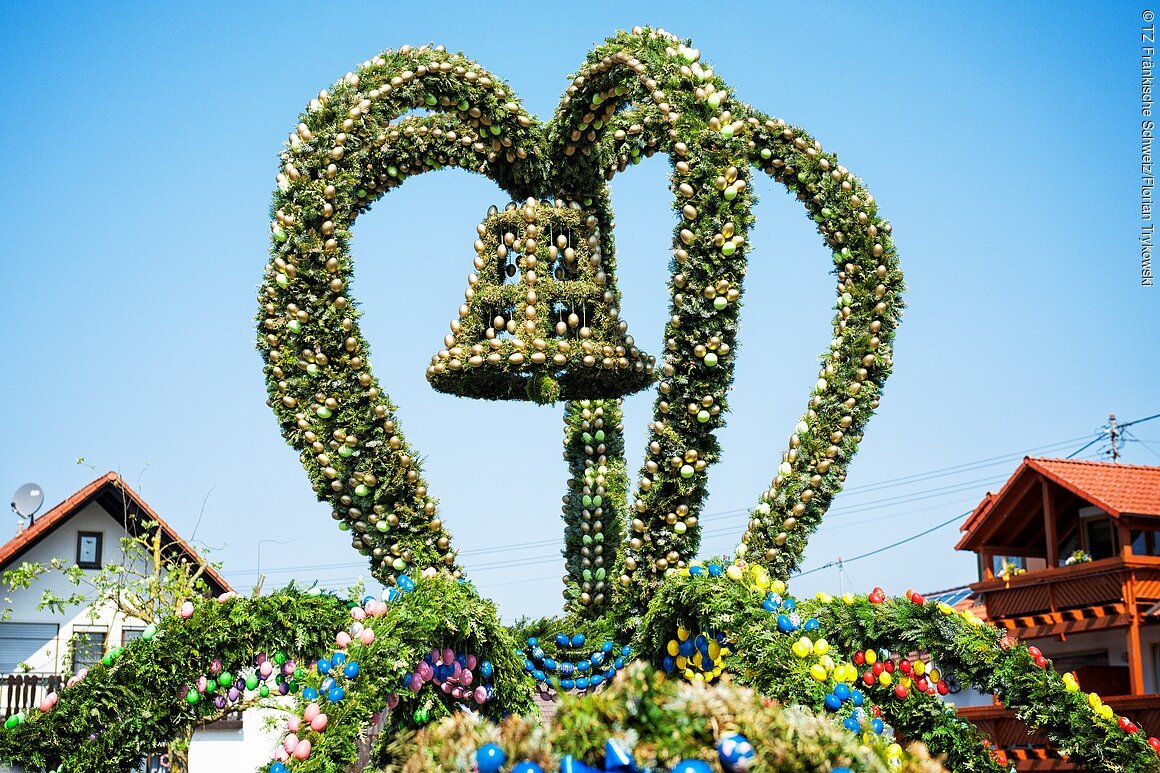 Since 1984, the „International Comic Salon” has combined art and commerce, mainstream and avant-garde in its program for four days in May or June. It is both a seismograph and a motor for the German industry and reflects the entire diversity of the genre. Over 30,000 visitors are now expected to attend this event taking place every two years.

Positioned in the center of the International Comic Salon Erlangen, you can visit the public exhibition in large tents on Castle Square and in the castle garden. Around 500 artists, German and international publishers, agencies, the comics trade and university comics classes present their programs here. Numerous new publications will be presented to the public for the first time. The artists from all over the world can be seen drawing and signing their books.

The Max und Moritz Gala at the Erlangen Markgrafentheater is the highlight of the Salon. The Max und Moritz Prize, awarded by the city of Erlangen, is the most important award for graphic literature in the German-speaking world. It is awarded by an independent jury of experts in various categories and contributes significantly to the recognition of comic art in all German-speaking countries. The award honors the work of outstanding artists, reinforces meritorious publishing work, and intensifies the debate about graphic literature. Albert Uderzo, Jacques Tardi, Alan Moore, Pierre Christin, Lorenzo Mattotti and Ralf König have been honored during recent years for their life's work.

The supporting program includes lectures, talks and discussions with cartoonists, authors, journalists and publishers, comic readings, drawing competitions and workshops. During the Comic Film Festival the Erlangen cinemas, all forms of animated film can be seen alongside new comic adaptations - from current anime to the avant-garde. On Family Sunday, numerous activities for children, young people and families can be experienced at reduced prices. 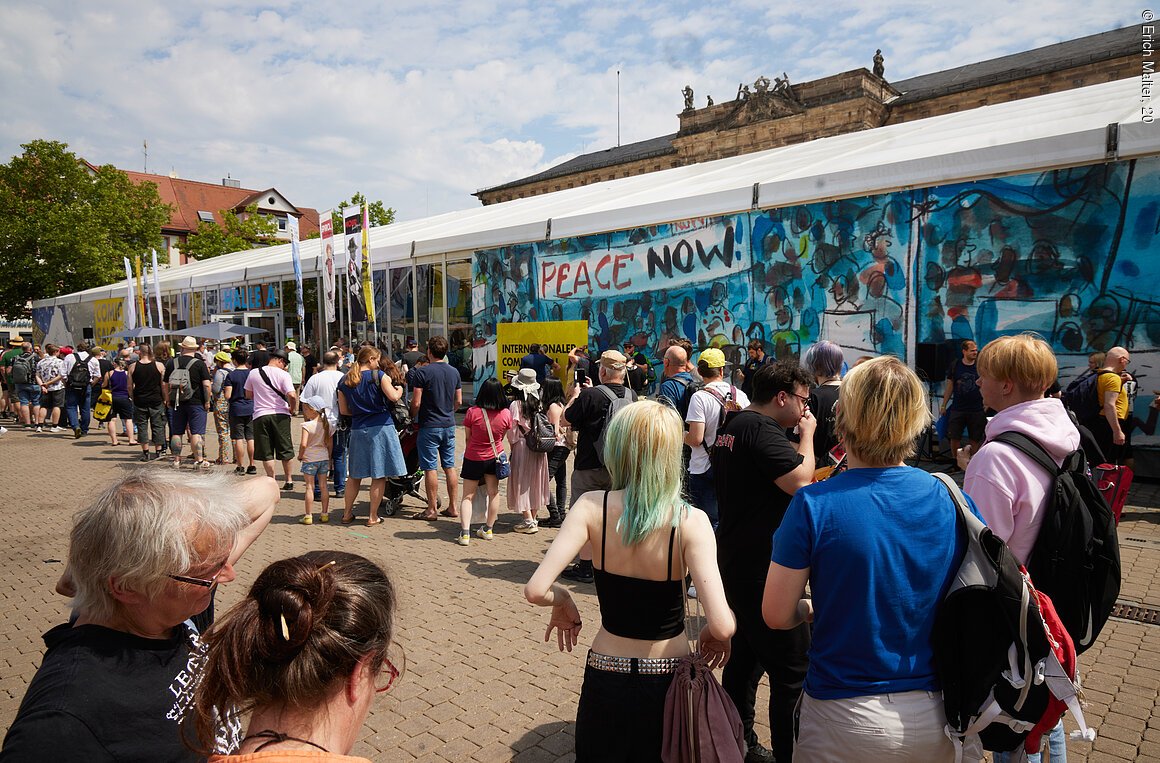 Wallenfels - Raft trip on the Wilde Rodach River (May to September)

Experience an artisan tradition of the Franconian Forest up close and in the thick of it. Take part in a spectacular and unique raft trip across the Wilde Rodach and enjoy an exclusive highlight!

From mid-May to mid-September, the town of Wallenfels offers its guests varied raft tours on 15 Saturdays, including a raft trip and Franconian delicacies. The raft trip starts in Schnappenhammer. You sit on a wooden beam and are skilfully brought through the weirs by your raftsman. A mature performance using only the raft hook and without any aids - in keeping with the 800-year-old tradition of rafting - and at one of the original locations to boot. The trip takes 40 minutes, depending on the water level. Getting wet is guaranteed, by the way.

After about 5 km, the trip ends on the Wilde Rodach at the raft house in Wallenfels. There, the Flößerlädla shop offers typical raft products to enjoy at home. A total of 23 rafts can accommodate up to 450 people.

On 15 Saturdays between May and September. Exact dates at www.flossfahrt-wallenfels.de 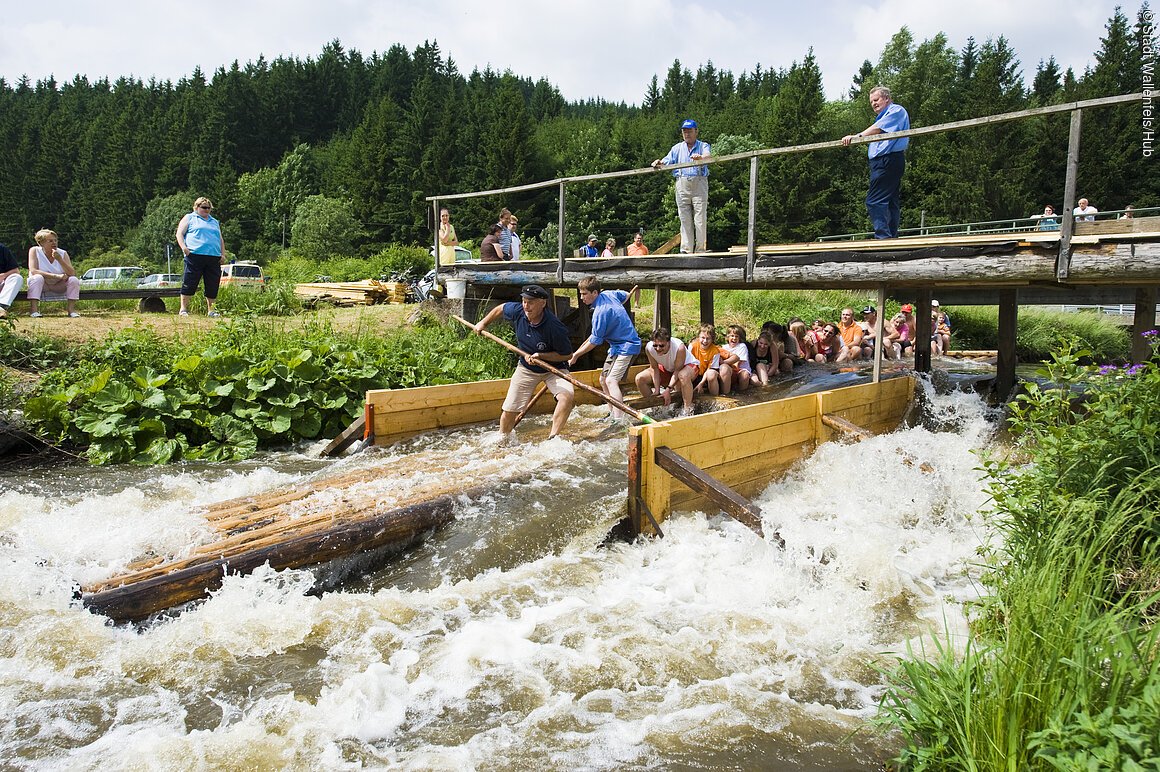 In the blooming Dennenlohe castle park and in the landscape park numerous exhibitors are spread out, who present their exclusive accessories on the topics of living in the green, design, garden, plants and lifestyle in a wonderful ambience.
Experience the castle park in full rhododendron bloom and be inspired by our exhibitors. You can also see many craftsmen live at work. Various caterers offer "lunch to go" in the park and the historic manor house. In addition, visitors will be offered an extensive supporting program:
Live concerts on the castle terrace, lectures, short guided tours and carriage rides through the landscape park round off the four garden days. 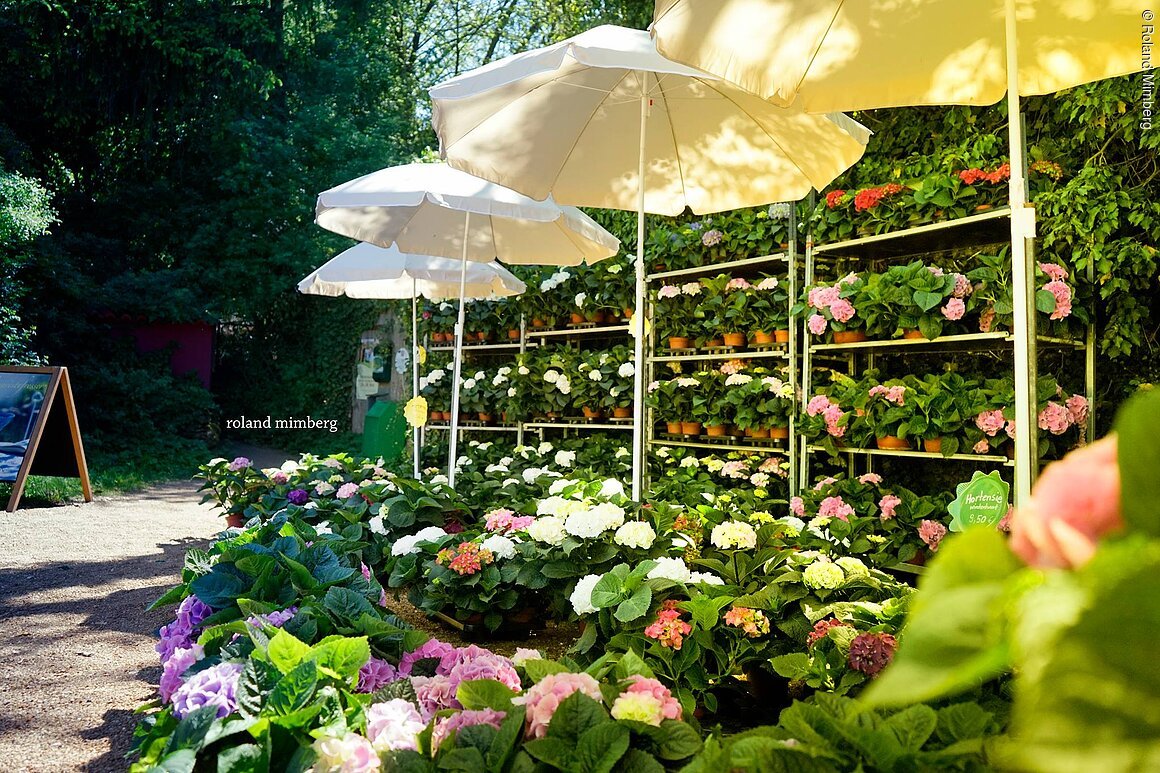 Always in June, the high time of the rose bloom, the botanical garden invites you to its traditional rose festival. In the entire area everything revolves around the queen of flowers. In hundreds of red and pink tones, but also in white and orange, the flowers shine and shine. People stroll around the beds and along the paths of the garden and marvel at the current blossom. The rose petals for the punch are of course from our own harvest, they are just the right ripeness for the popular drink according to a secret recipe. In addition to the large event area in the middle of the botanical garden, the raffle around the rose is a popular meeting point. Over there, handmade soaps, liqueurs and jams - of course with rose aroma. Selling plants with expert advice is another highlight.

The eye-catching hats that the ladies wear at the Rose Festival are a bit of a cult. A touch of Ascot is then in the air. 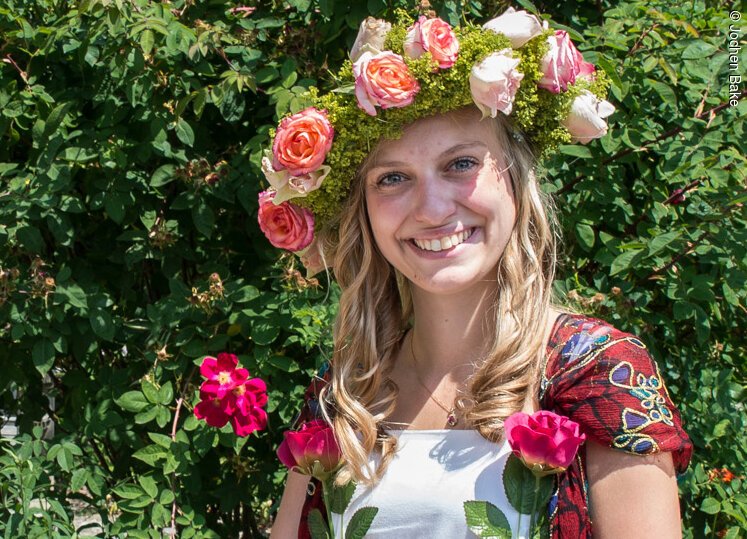 Join in on this very special evening once a year - the Lichterserenade will thrill you. At nighfall hundreds of little white paperboats with candles are set on the river to make their way downstream into the dark. Let yourself get carried away by this beautiful atmosphere. Afterwards the local fire brigade sets up a magnificent lasershow with music and fireworks at the end. The  Let this summernight enchant you, as the sky lightens up with brilliant colors and sparkling lights.

A fascinating experience is the summer event See in Flammen (Lake on fire) at the Lake Altmühl.
Torch floats, illuminated sailboats, an illuminated excursion boat MS Altmühlsee and the highlight, a baroque high fireworks with music offer an unforgettable experience. 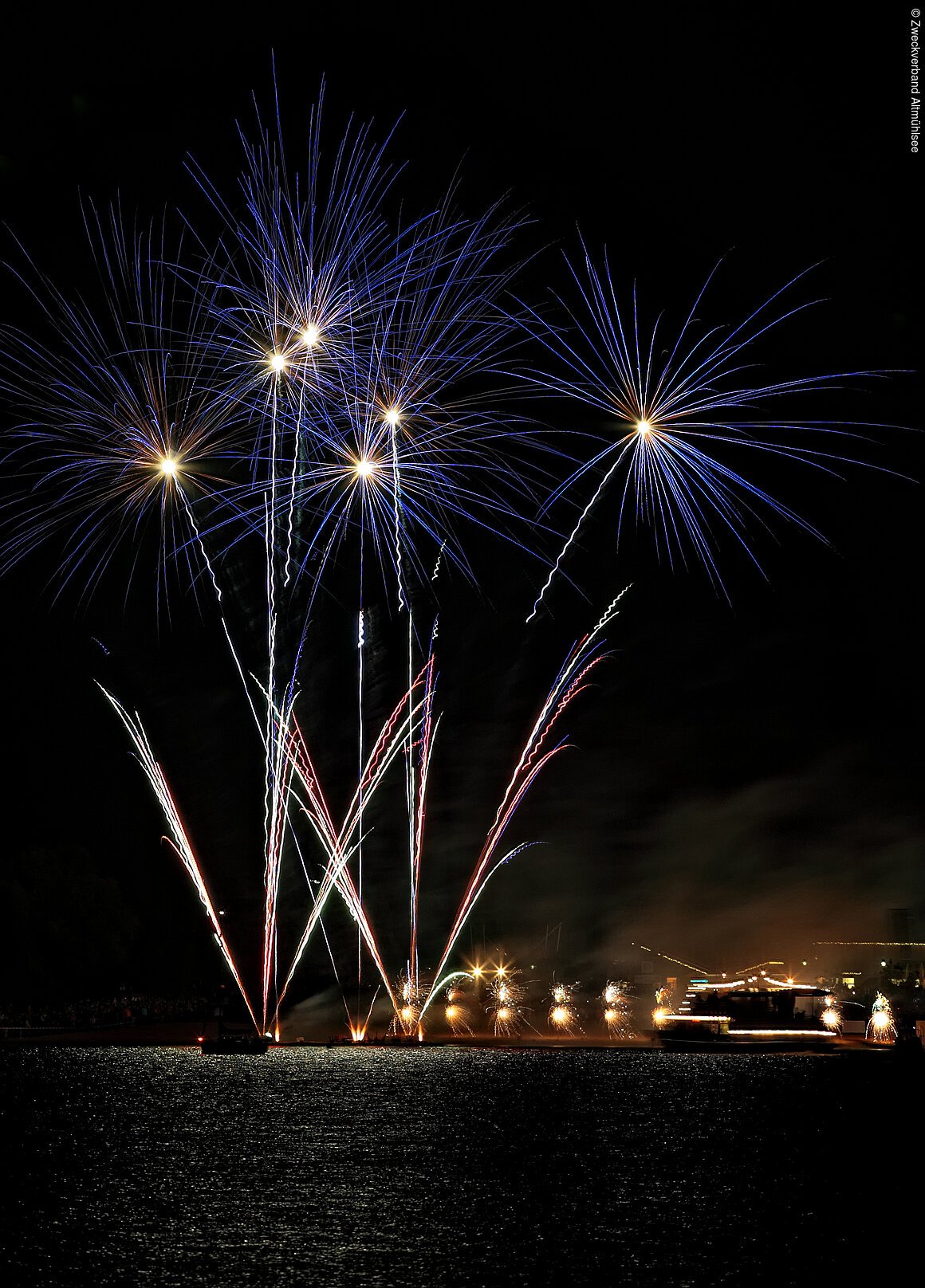 The Magical Moments Brombachsee promise a breathtaking night.
A spectacular light and laser show - synchronized to rousing music - from the deck of the excursion Trimaran MS Brombachsee transforms the lake into a unique setting. During the night, the show is projected into gigantic masses of fog at the four event locations Allmannsdorf, Enderndorf, Absberg-Seespitz and Ramsberg. In addition, there will be magicians, light artists and other "magical" experiences. Live music on the four beaches as well as a party DJ on board the trimaran also await the visitors. Culinary specialties from all over the world complete the offer. 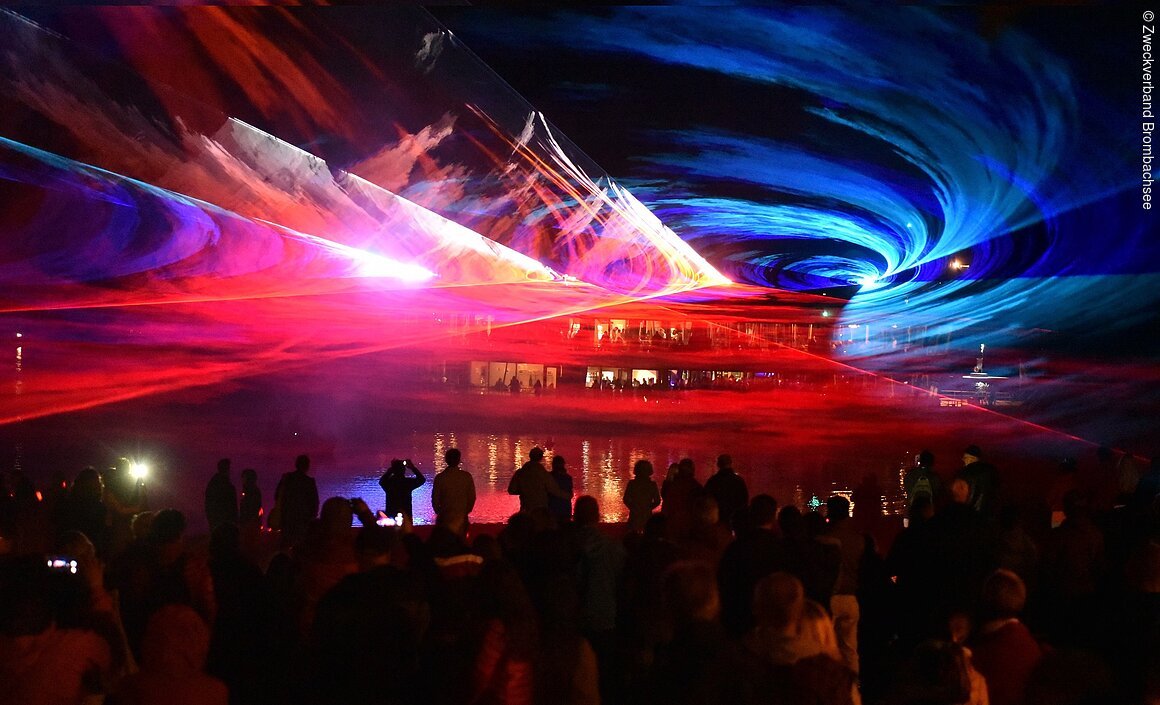 Every year, when autumn arrives in the Franconian Lake District, you can see colorful kites in the sky.

In Hilpoltstein on the Main-Danube Canal and on the Altmühlsee, enthusiastic children and adults meet and enjoy flying their kites into the sky together with many others. Numerous kite creatures in all kinds of colors, figures and shapes then cavort above the heads of the visitors when the wind is good and let them look up in amazement. 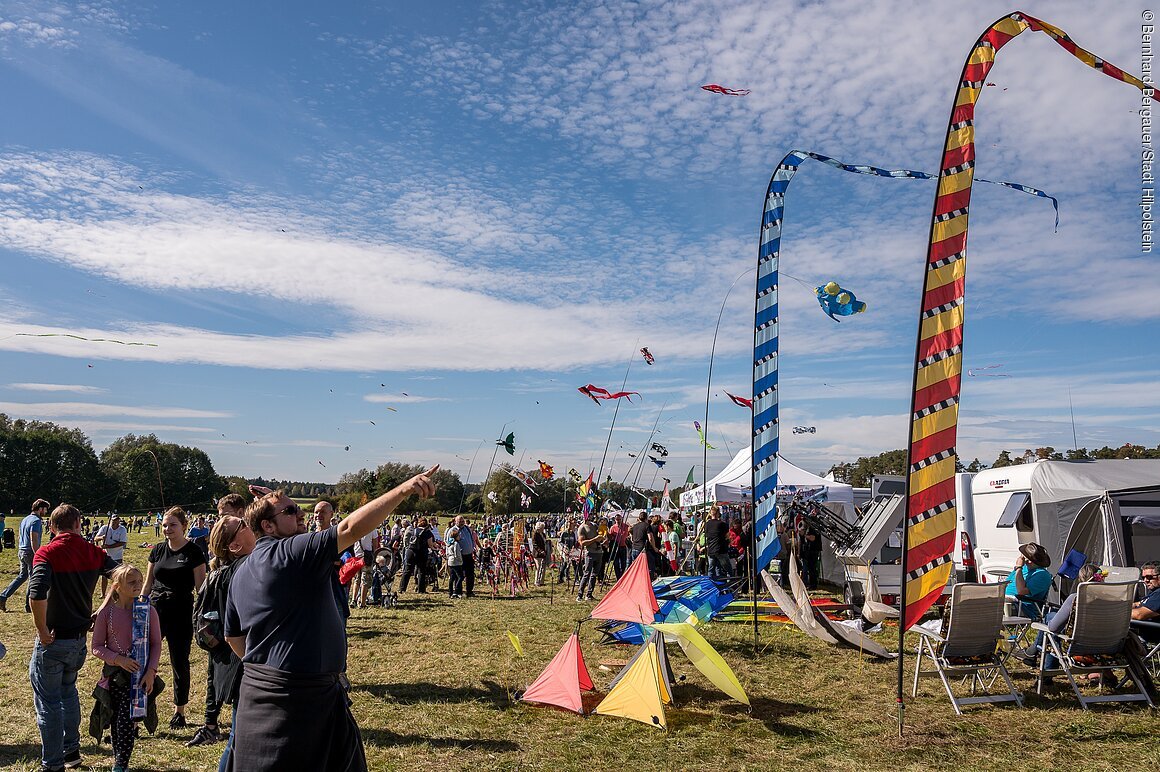 The Hof International Film Festival has long been regarded by the public and the film industry as the most important German film festival after the Berlinale - and yet it still inspires with a particularly charming character. They have remained a real family celebration - an informal event, without any red carpet or boulevard.

Nevertheless, they are talent factories and tightrope knife at the same time: the latest films are of course in the foreground, but the social gatherings and the almost endless discussions over local culinary delights also provide a special attraction. A traditional highlight is the presentation of the "Film Prize of the City of Hof", the winners of which read like a "Who's Who" of German film. 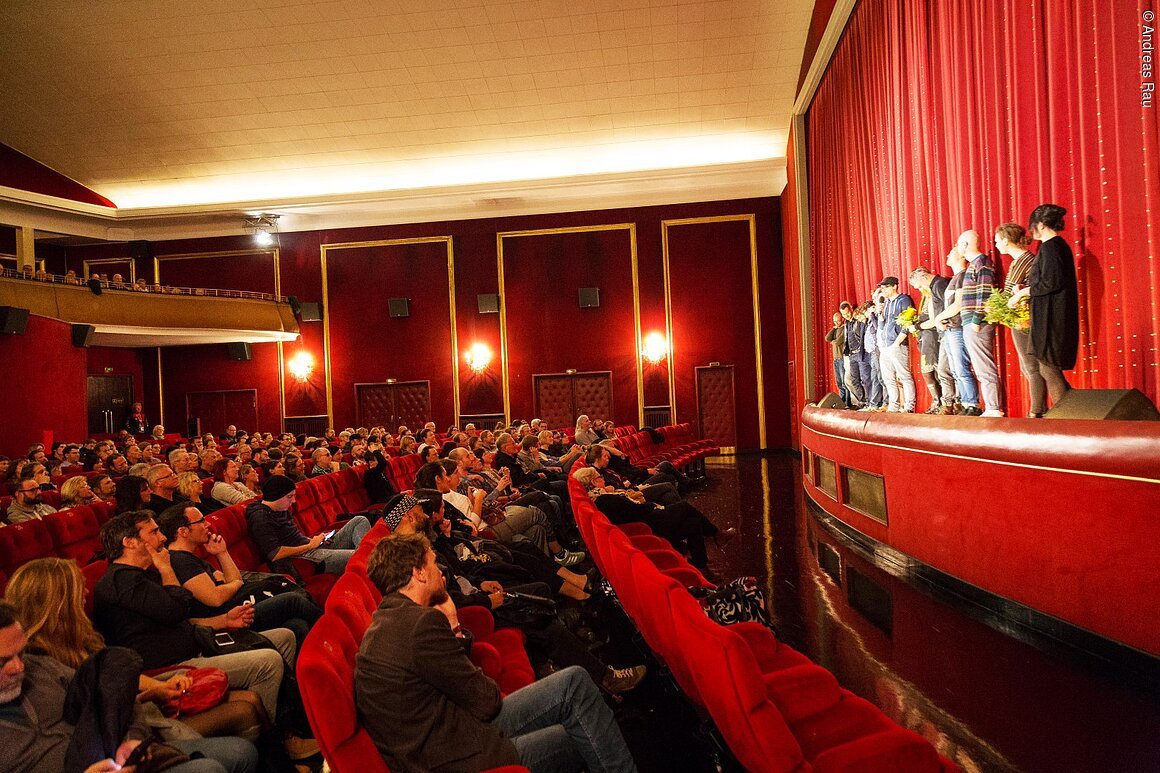 Thousands of lights conjure up an atmospheric mood and countless fire baskets and fireplaces provide warmth and a sense of well-being. The “Winterszeit” owes this uniqueness on the one hand to its high-quality exhibitors from the fields of fashion, arts and crafts, home accessories, jewelry and antiques, and on the other hand to a mix of attractive program items for all ages. Selected caterers will take care of the physical well-being on all days and will present various beer specialties and punch. 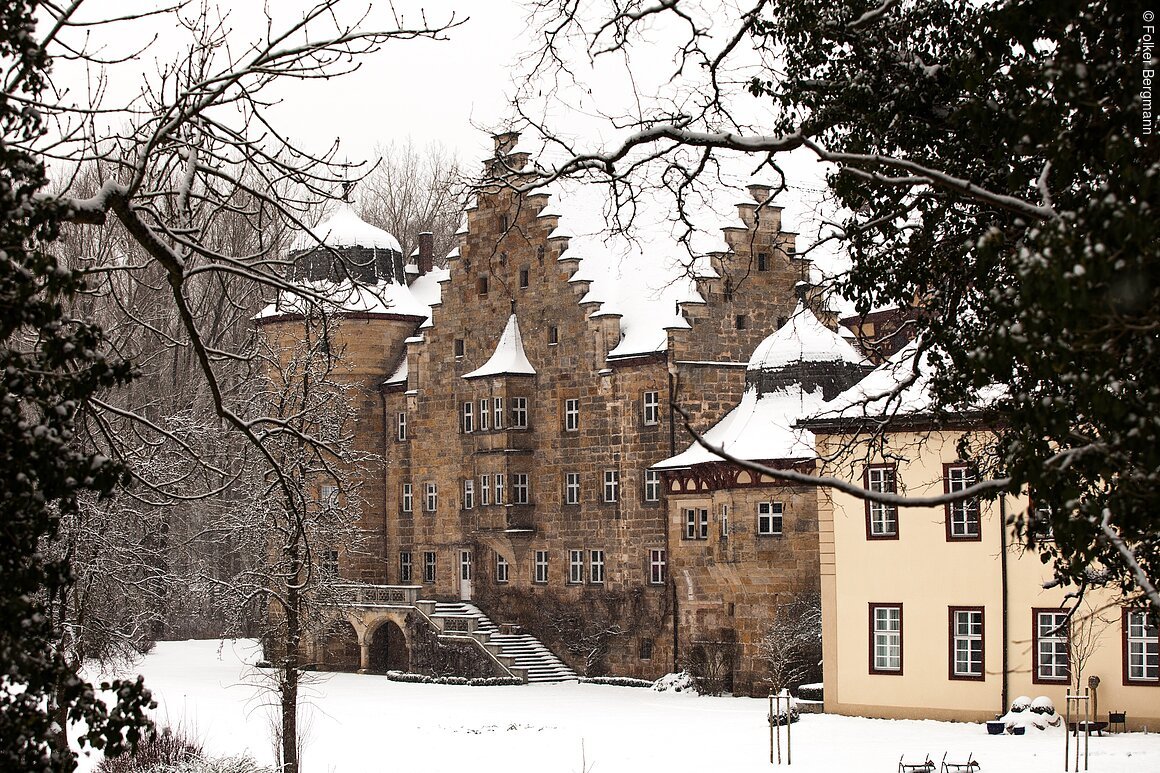